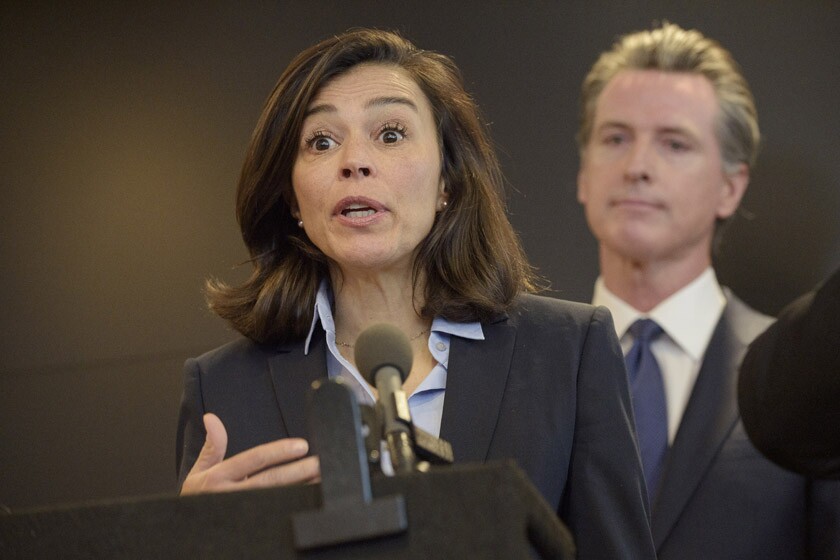 The sudden departure this week of California’s public health officer is intensifying instability in the state’s vital health departments as they struggle with crushing workloads and navigating the worst health crisis in a century, according to interviews with current and former healthcare and government officials.

Dr. Sonia Angell stepped down from the California Department of Public Health on Sunday after only 10 months in the job. Her second-in-command, who led the state’s testing task force, left in July. The resignations add to a list of more than a half dozen top health officials who have departed over the last year, raising concerns that the upheaval is threatening the state’s response at a critical time.

“We’re going to run out of people,” state Sen. Richard Pan (D-Sacramento) said of the turnover in the state’s public health infrastructure. “How many people do you think are qualified to be California’s [public health] director that are floating around out there in the whole country? It’s not a very large pool. And if we’re going to churn through them like this, we’re going to be in big trouble — if we’re not already in big trouble.”

The numerous changes have increased pressure on California’s underfunded state health departments as they try to keep pace with the governor’s flurry of announcements on new guidelines, programs and policy changes, which one former agency official likened to a daily fire drill. Public health leaders at the state and county levels have also become a target of hostility over business and mask restrictions.

Since September, four people have worked as director of the Department of Health Care Services, which oversees the state’s MediCal healthcare program that serves 13 million low-income and vulnerable residents.

The exodus includes holdovers from former Gov. Jerry Brown’s administration that Newsom was slow to replace. Others have left under more unexpected circumstances.

Newsom tapped Angell, a former New York City health official, to lead the California Department of Public Health in September. She faced a steep learning curve in a state with thorny healthcare politics. Many of her predecessors had served previously as county public health officers.

Angell played a supporting role at Newsom’s first press conference on the COVID-19 pandemic in late February, describing common symptoms of the virus and reassuring Californians that the risk to the general public remained low with only 33 confirmed cases in the state. But over time she made fewer appearances as Newsom turned more often to Dr. Mark Ghaly, the secretary of Health and Human Services.

When Newsom inaccurately described a drop in positive COVID-19 cases last week, it was Ghaly who went in front of the camera the next day and disclosed the massive data error in a system overseen by Angell’s department. Later, Ghaly said Newsom “directed a full investigation of what happened and we will hold people accountable.”

Angell abruptly resigned on Sunday, effective immediately. The following day, Newsom refused to directly address whether he asked her to step down, but added that “if it’s not obvious, then, I encourage you to consider the fact that we accepted the resignation.”

“We’re all accountable in our respective roles for what happens underneath us,” he said. Newsom emphasized that he was unaware of the data problem when he touted the decrease.

Little has been publicly shared about the events leading up to Angell’s departure other than the existence of data errors in the system she oversaw. For some, the departure felt too rash.

“This is a near-impossible job to do well in normal times,” said Dr. Richard Jackson, a former California state health officer under then-Gov. Arnold Schwarzenegger and professor emeritus at UCLA’s Fielding School of Public Health.

Jackson said those in the state’s public health officer role have long been hindered when responding to emergencies due to layers of bureaucracy, including inflexible rules for adjusting spending. Add noncompetitive salaries for medical, scientific and data management staff with a cumbersome hiring process and it creates a nightmare for recruiting, he said.

The failure of the California Reportable Disease Information Exchange, the state’s electronic disease reporting and surveillance system, didn’t come as a surprise to those familiar with it.

The system, known as CalREDIE, was not originally built to handle both positive and negative test results or a large volume of information from many labs, said Karen Smith, who preceded Angell and was appointed director of the California Department of Public Health in 2015 by Brown.

“We’ve been trying to get funding to improve the laboratory reporting system and the case management functionality of CalREDIE virtually since it was begun,” Smith said.

While Ghaly has said human error added to the problem, Smith said a “tiny” group of people are managing hundreds of data systems within the state’s public health department.

Jackson said Angell was put in an untenable situation.

“I have a feeling Dr. Angell was blamed for a rickety system,” Jackson said. “There needs to be an aggressive look at this.”

Jennifer Kent, director of the state Department of Health Care Services, resigned under pressure in September after she criticized vaccine bill protesters on her private Facebook page.

In June, Newsom appointed Will Lightbourne to Gilbert’s former role, the fourth person to hold the position in nine months. Lightbourne, 70, had retired in 2018 as director of the state Department of Social Services.

In addition to Gilbert, Angell’s resignation from the Department of Public Health on Sunday came on the heels of other key departures. Last month, Dr. Charity Dean, the department’s second in command, stepped down.

Their departures were also compounded by the resignations of more than a half dozen county public health officers during the pandemic.

“People say it’s a marathon, not a sprint, but quite frankly you’ve got to feel like you’re sprinting for an entire marathon because it just keeps coming,” Smith said. “There is no question that the degree of stress has increased the number of people who’ve chosen to retire and or who left.”

Angell’s job responsibilities will be split between two women, state officials said: Sandra Shewry will take over as acting director of the Department of Public Health, and Dr. Erica Pan will become the acting state public health officer after having joined California’s public health department in June as the state’s epidemiologist.

Shewry, who is vice president at the nonprofit California Health Care Foundation, previously oversaw the state’s Medi-Cal program under Schwarzenegger. Pan, who was previously Alameda County’s health officer, notably clashed with Tesla Chief Executive Elon Musk in May over his electric car factory’s decision to restart production despite shelter-at-home orders at the time.

Smith said state law prevents the administration from splitting the state public health officer and director roles on anything more than a temporary basis, indicating another shift at the top ranks of the health department is on the horizon.

The changes come as some counties and business groups complain about an inconsistent pandemic response. Many note that the lack of strong leadership at the national level has placed an undue burden on the state, but say it’s difficult to get clear guidance from the Newsom administration.

Rachel Michelin, president of the California Retailers Assn., said her group has tried to engage with public health officials to understand how counties can get off the state’s watch list. The list determines which counties have to close gyms, shopping malls and other businesses. It was frozen over a week ago in light of the data problems.

“We’re trying to figure out what’s the path and the Department of Public Health just hasn’t been responsive,” Michelin said. “What are the rules? And it does seem like the rules keep changing in the middle of the game.”

Matt Willis, a public health officer in Marin County, said the data problem, the rapid spread of the virus and resignations of top leaders have left California in “a vulnerable position.”

“We are coming out of a month and a half of significantly elevated transmission across the state and a lot of dynamic changes and policies to try and match that,” Willis said. ” The ground has been shifting in a lot of other ways and this is another stress for us as a state.”