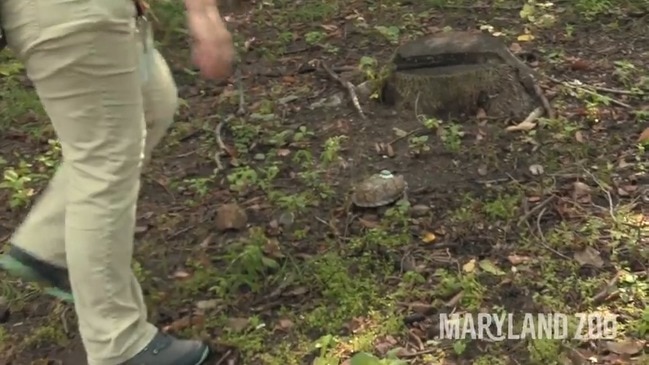 Two years ago, a box turtle was brought to the Maryland Zoo with a broken shell. After surgery, the turtle was fitted with a special wheelchair made of Lego. Now, it’s back on four legs, and back in the wild. The Eastern box turtle was brought in after it was found in Druid Hill Park in Baltimore with multiple fractures to its shell. The zoo’s veterinary team stabilized the damaged shell, which is now held together with metal bone plates, sewing clasps, and surgical wire. The turtle then received a super-cool Lego wheelchair to help him with the recovery process. “It was important to keep the bottom of the shell off the ground so it could heal properly,” Garrett Fraess, a veterinary extern at the zoo, said in a press release. “They don’t make turtle-sized wheelchairs. So, we drew some sketches of a customized wheelchair and I sent them to a friend who is a Lego enthusiast,” he said. Two years later, the turtle has returned to Druid Hill Park. Dr Ellen Bronson, senior director of animal health at the zoo, said of the critter’s journey: “This turtle has made tremendous progress in shell healing over the last two years. From his successful use of a Lego wheelchair as a mobility aid early in his recovery to now, he has been a unique zoo patient. It was a joy for our veterinary team to watch him return to his native habitat today.” Credit: The Maryland Zoo via Storyful