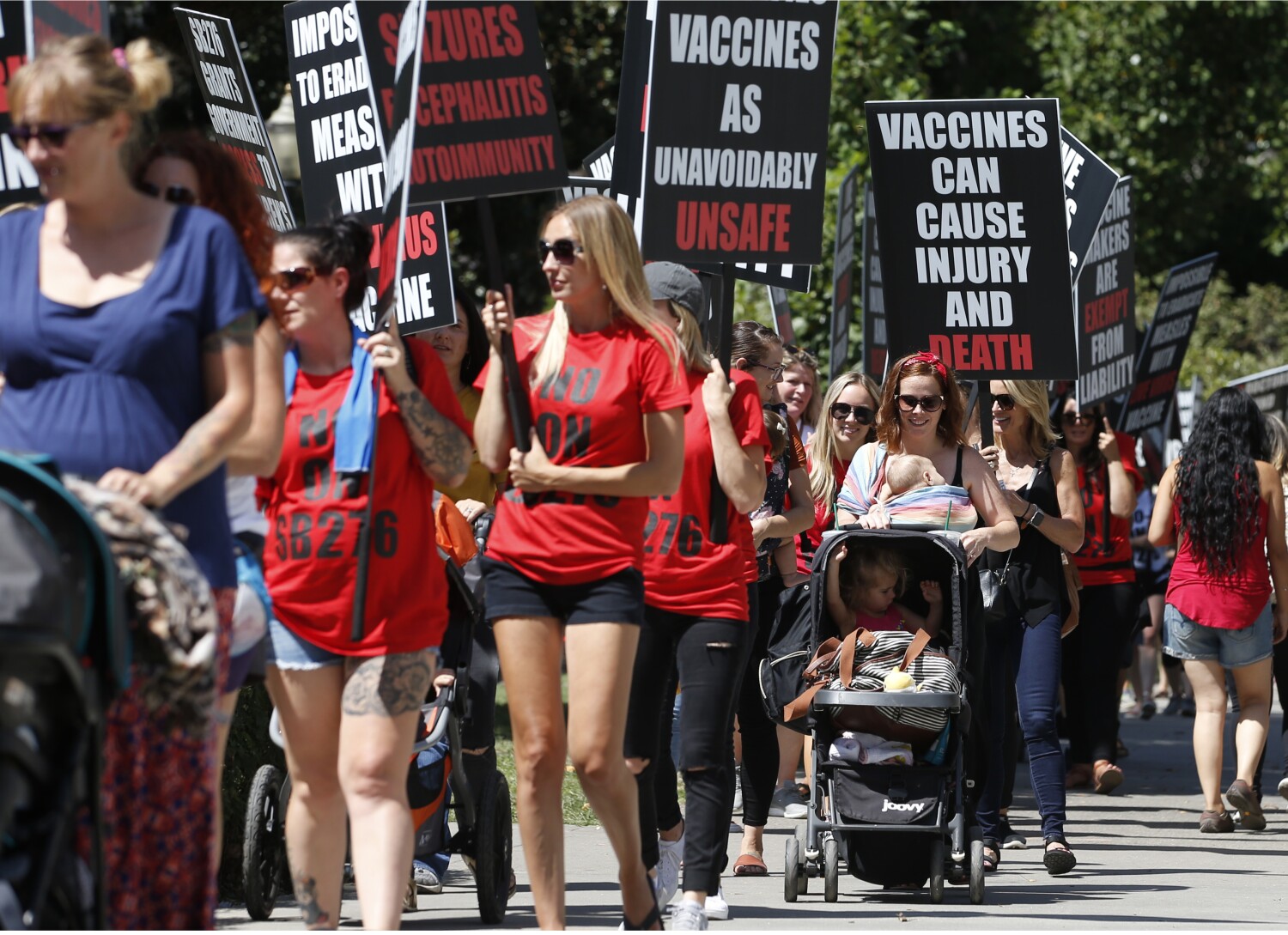 A pair of hotly debated new California laws limiting which schoolchildren can skip vaccines appears stuck in bureaucratic limbo, the result of uncertainty over how to interpret last-minute changes made before the legislation was signed last year by Gov. Gavin Newsom.

Meanwhile, the state Department of Public Health, which is tasked with offering key guidance on the new vaccine laws, has been silent on the confusion over the rules.

Senate Bill 276 calls for the public health department to create a standardized vaccine exemption form that doctors will electronically submit to the state for review beginning next January. Newsom insisted on a second piece of legislation — Senate Bill 714 — to ensure the new rules would be “implemented in an effective manner.”

However, it’s unclear when that oversight begins.

“This should absolutely be happening now,” said state Sen. Richard Pan (D-Sacramento), the author of the vaccine legislation.

But school nurses who review medical exemptions said that unless they receive guidance from the public health department telling them otherwise, exemptions granted by scrutinized doctors will not be reviewed until 2021.

“I don’t think most school nurses understand this law,” said California School Nurses Assn. President Pamela Kahn. “When reading the law, I can see why you would assume it’s happening now, but that’s not happening now in the school community.”

While the law allows the state to review medical exemptions written before Jan. 1 in cases in which the approving physician has been disciplined by the medical board, it does not specifically say when those reviews should begin. Most California statutes take effect on the first day of the year after approval by the governor. But several key provisions in the vaccine law specify that they should take effect in 2021, leading some to say that later date also applies to the new review process.

The statute also doesn’t indicate whether the review of a disciplined doctor’s medical exemptions would be scrutinized automatically once punishment is finalized, or if decisions to investigate would be made on a case-by-case basis. It’s also unclear if the disciplinary action that brings additional scrutiny must be related to immunizations.

Only one doctor has been disciplined for a vaccine-related case — Dr. Bob Sears, a well-known Orange County physician whose practice caters to parents who oppose some or all vaccinations. State public health officials declined to answer The Times’ questions on whether the law affects Sears’ previous medical exemptions.

The medical board put Sears on a 35-month probation in 2018 after charging him with committing gross negligence for failing to obtain the “basic information necessary” to determine whether a child should skip future vaccines. Last year, Sears faced a new complaint from the state medical board alleging that he wrote improper vaccination exemptions for children.

“If a physician has been disciplined by the medical board for something related to inappropriate medical exemptions, as Dr. Bob Sears has been, then all of that doctor’s medical exemptions are now invalid,” Pan said of the law. “Schools should know that a child with a medical exemption written by Dr. Sears is now void.”

But Kahn said she’s waiting on guidance from the state public health department on how that part of the law should be implemented in schools. The laws were a primary concern at a recent school nurses’ association conference, she said.

Kahn said school officials can research which students have medical exemptions, but in most cases, determining which doctor wrote them would require pulling individual student files. If that is the expectation, Kahn said, school nurses will need significant notice to complete that work.

Under SB 714, a doctor under investigation by the Medical Board of California in a case involving vaccinations can’t write a new medical exemption unless the case is cleared in the doctor’s favor. There are four doctors with pending allegations related to immunizations before the medical board. They include Drs. Sears of Capistrano Beach, Ron Kennedy of Santa Rosa, Tara Zandvliet of San Diego and Kenneth Stoller of Santa Rosa.

Pan says that provision of the law is also effective now. But the language of SB 714 references a standardized form that has yet to be created by the public health department. Pan contends the intent of the law is still clear — doctors under investigation should not be writing new medical exemptions.

“Parents were promised that this fall, schools would be healthier and safer places,” said Leah Russin, executive director of Vaccinate California, a key group that supported SB 276. “The departments that the governor manages have not done anything to provide guidance for this year. At the end of the day, it seems what we have is a real challenge with the late changes made in SB 714.”

The public health department said in a statement to The Times that the agency is “aware of the many steps and the timelines for implementation.”

“The Department is moving quickly to finalize the forms and the systems required to receive those forms,” the agency said. “Next steps are being determined within the guidelines outlined in the laws.”

Those decisions will be a key factor in determining how sweeping the new law will be. Meanwhile, critics of the legislation continue to protest in Sacramento, including Monday outside Newsom’s private residence. California First Partner Jennifer Siebel Newsom, who opponents have lobbied as a potential ally, spoke to protesters outside the gate to her home on Monday, where she said, “I think there needs to be more conversation around spreading out vaccines, around only giving children the vaccines that are most essential.”

A short video of her comments was posted by protesters online, where she told them to trust the new law and that she’s “been trying to have dialogue internally.” She then asked that protesters not post the video online. A spokesman for the governor said the laws signed by Newsom last year are the official position of the administration.

“I feel confident [the public health department] will get this done, but I think it could come down to the wire,” said Catherine Flores-Martin of the California Immunization Coalition.

Once officials have created the form and sent it to the immunization registry next year, the department will then monitor which physicians are submitting medical exemptions. The vaccine waivers are currently submitted directly to schools and local districts, making it difficult to determine how many medical exemptions a single doctor writes.

However, vaccine exemption data released by a handful of school districts in recent years showed a few doctors wrote the majority of them.

Zandvliet, a San Diego physician who is under investigation by the state medical board, estimated that she’s written about 1,000 medical exemptions since 2015, according to the accusation filed against her. By comparison, doctors who spoke in support of the laws said they have written only a handful of medical exemptions over the course of their careers.

California has been strengthening its inoculation laws since 2015, when the state eliminated exemptions based on personal or religious beliefs. Instead, children must have a medical reason to skip some or all shots required for public and private school and daycare. Since that law was enacted, though, the number of children with medical exemptions has grown and some physicians have been accused of excusing children for questionable reasons.

“There is no question that these vaccine laws will make our children and communities safer by ensuring public health officials are tracking when physicians issue an unusual number of medical exemptions from vaccines and halting the practice of unnecessary exemption,” Health and Human Services Secretary Dr. Mark Ghaly, who oversees the public health department, said in a statement. “Bottom line: These laws will make California kids and communities healthier.”

Under the new law, the public health department can also make a determination that a doctor is “contributing to a public health risk in one or more communities” and bar that physician from writing new medical exemptions for up to two years.

“I’m not writing any more exemptions unless I see a patient who qualifies under the new law — a near-fatal allergic reaction or permanent brain injury after vaccines — so they won’t really have any target to throw their darts at,” Sears said.