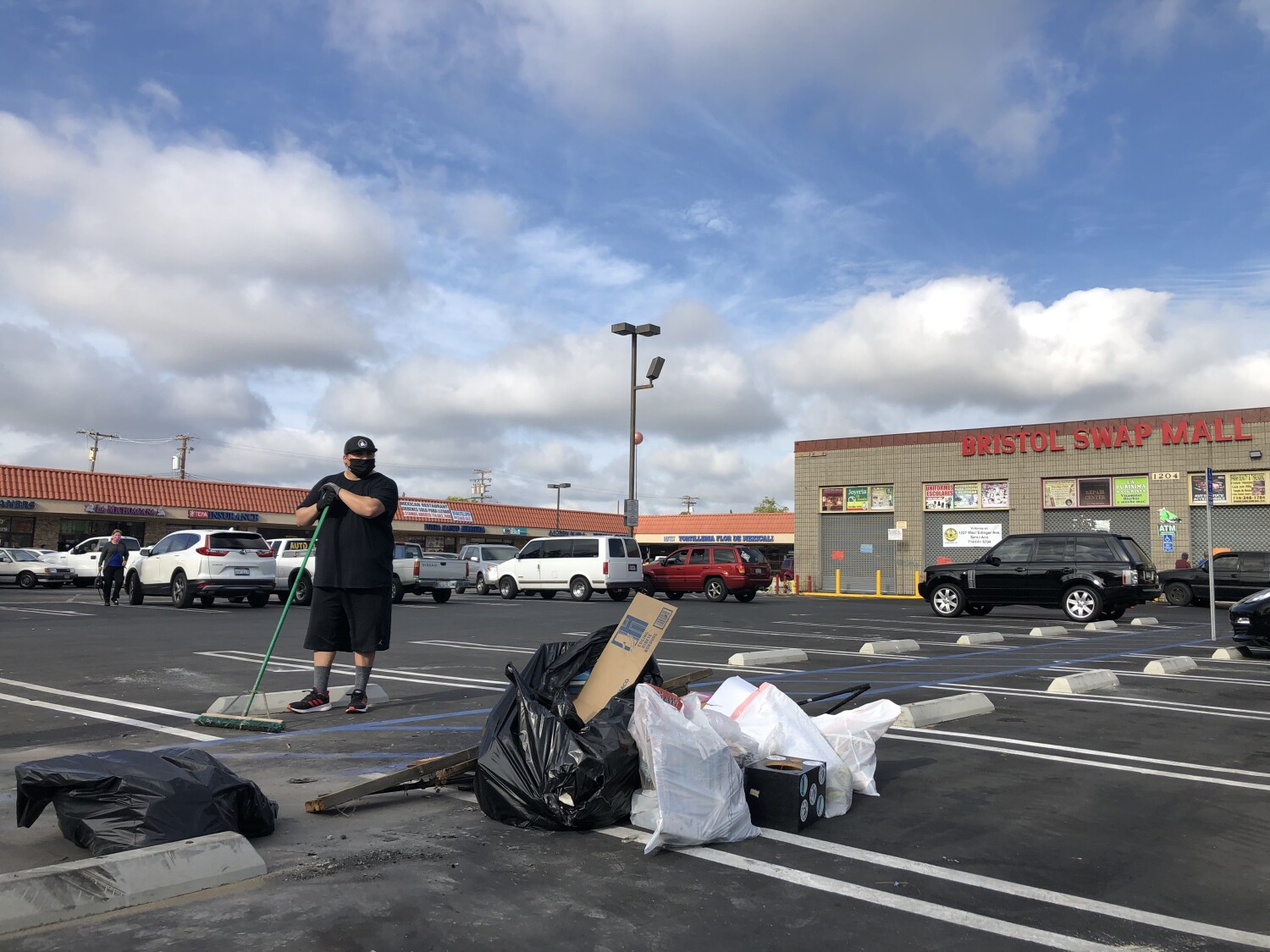 As a protest against police brutality Saturday night in Santa Ana turned from a rally into a free-for-all, a debate well-known to Orange County raged on social media:

What’s up with Santa Ana?

The county seat has long loomed large in the region’s imagination. A dying, dangerous brown super barrio that tarnishes the rest of O.C. A proud town worth defending. A place wasted on its residents. One with potential.

All of those conflicting emotions — and more — were expressed online while more than 400 protestors went from holding signs and chanting to breaking windows and dodging the tear gas canisters and rubber bullets of police officers and sheriff’s deputies.

On a Facebook livestream watched simultaneously at one point by over 21,000 people, the majority of viewers registered their disgust with angry-face emojis and worries about what it would mean for their city. On Instagram, some suggested that damage should rain down only on gentrified areas of the city. Snapchat users joked that everyone should take the melee to wealthy Huntington Beach, Irvine or Newport Beach.

And on Twitter, more than a few non-residents expressed joy at the possibility that Santa Ana might burn.

The debate over what the protest meant for the city continued early Sunday morning, as over 100 people descended on Bristol Street between McFadden and Edinger avenues, where the protest took place.

“Santa Ana wouldn’t be like this if wealthy cities didn’t dump their problems on us,” said 19-year-old Axidi Iglesias. “White people in Huntington Beach protested for a haircut. Here, it’s against actual problems.”

Everyone who showed up had face coverings, gloves, brooms — and opinions.

“They destroyed for their game and not the cause,” said Alexander Rodriguez, 25, who stood outside a Smart and Final on Edinger with smashed-in windows. “They don’t care how the world sees us.”

“It puts us in a bad position,” said 40-year-old machinist Antonio Ortiz, who remained in his truck. “What did we win from all this?”

“I tell my kids all the time about using their voice,” said Santa Ana High history teacher Ann Huizar. She picked trash out of bushes alongside her son. “But it needs to be in a constructive way.”

At O’Reilly Auto Parts, store manager Miguel Briceño spoke through the crack of a boarded-up door.

“They don’t listen to our silent protests,” said the 38-year-old, “so maybe they’ll listen to this.”

One thing no one questioned: the location.

In a county as widespread as Orange County, picturesque areas — the Huntington Beach Pier, the Orange Circle, outside the Disneyland gates — have become favorites spots for protesters. This stretch of Santa Ana is the opposite: It’s right in the middle of working-class neighborhoods, the type of location outsiders usually never bother to explore.

On Easter weekends, lowrider clubs cruise all day and night. After big victories by Mexico’s men’s soccer team, boisterous fans gather at Bristol and McFadden and swarm from there. Over the years, that intersection in particular has seen protests against gang violence, Donald Trump and police brutality, and in favor of immigration reform and student rights.

“That’s the heart of Santa Ana right there,” said Cal State Fullerton professor Erualdo Gonzalez, who specializes in urban planning in Latino communities. His grandmother’s house stands two blocks away from there. “It’s a microcosm of what Santa Ana is — the housing, the consumerism, the mexicanos.”

He wasn’t surprised at all the rancor over Saturday’s events — both among the protesters and the audience at home. Friends and relatives who were at the protest have organized against city leaders over what they see is their neglect of Santa Ana’s working-class residents. But others in his circle openly complain about how things used to be better, and how this new generation is just messing everything up.

“Some people agree with all the bad stereotypes and say, ‘Yeah I want to get out of Santa Ana,’ and others want to stay and improve and fight for it,” Gonzalez said. “But for everyone from here, there’s an us-against-the-world mentality. And when the rest of Orange County talks trash, that’s when we really unite.”

The damage from Saturday’s protest wasn’t as bad outside the Bristol Shopping Mall off McFadden. A long line of shoppers stood in front of La Flor de Mexicali for fresh corn tortillas. Outside Christy’s Donuts, the usual scrum of retired Latino laborers hung out with their coffee and crullers.

“What the chamacos [young people] did wasn’t right,” said 72-year-old Jesus Cervantes. But, he said, what police did to George Floyd “wasn’t right, either. Of course people are going to get angry.”

The area’s property manager, who only gave her name as Cheryl, said worried tenants had texted her all night. “They have put a lot of money into getting ready to reopen,” she said. “And what happens? This? You don’t punish the people who live here. They’re stealing from their own community.”

As more people came to clean up, tears began to stream down her face.

“This here?” she said, her glasses fogging up. “This is the antithesis of violence. This is the Santa Ana I love.”

Alma Arias, directing friends in the cleanup, said, “If we want people to stop stereotyping us, we need to be the change.” The 30-year-old payroll manager came from Placentia but grew up in Santa Ana.

“It’s frustrating to wake up to this,” she said.

“I’m proud that my city showed up and stood up,” said Gilbert, 33. “The problems from the police are real.”

Gil, a retired medical worker, cracked that he attended a rally in Orange earlier that Saturday “and it was all white people. They don’t know what’s really up.”

He said that, during the 2018 FIFA World Cup, he received a ticket for honking his horn after Mexico’s upset over Germany.

“We all get hassled here — everyone has stories,” Sanchez said. “The rest of Orange County doesn’t even know. That they keep putting us down is pathetic.”