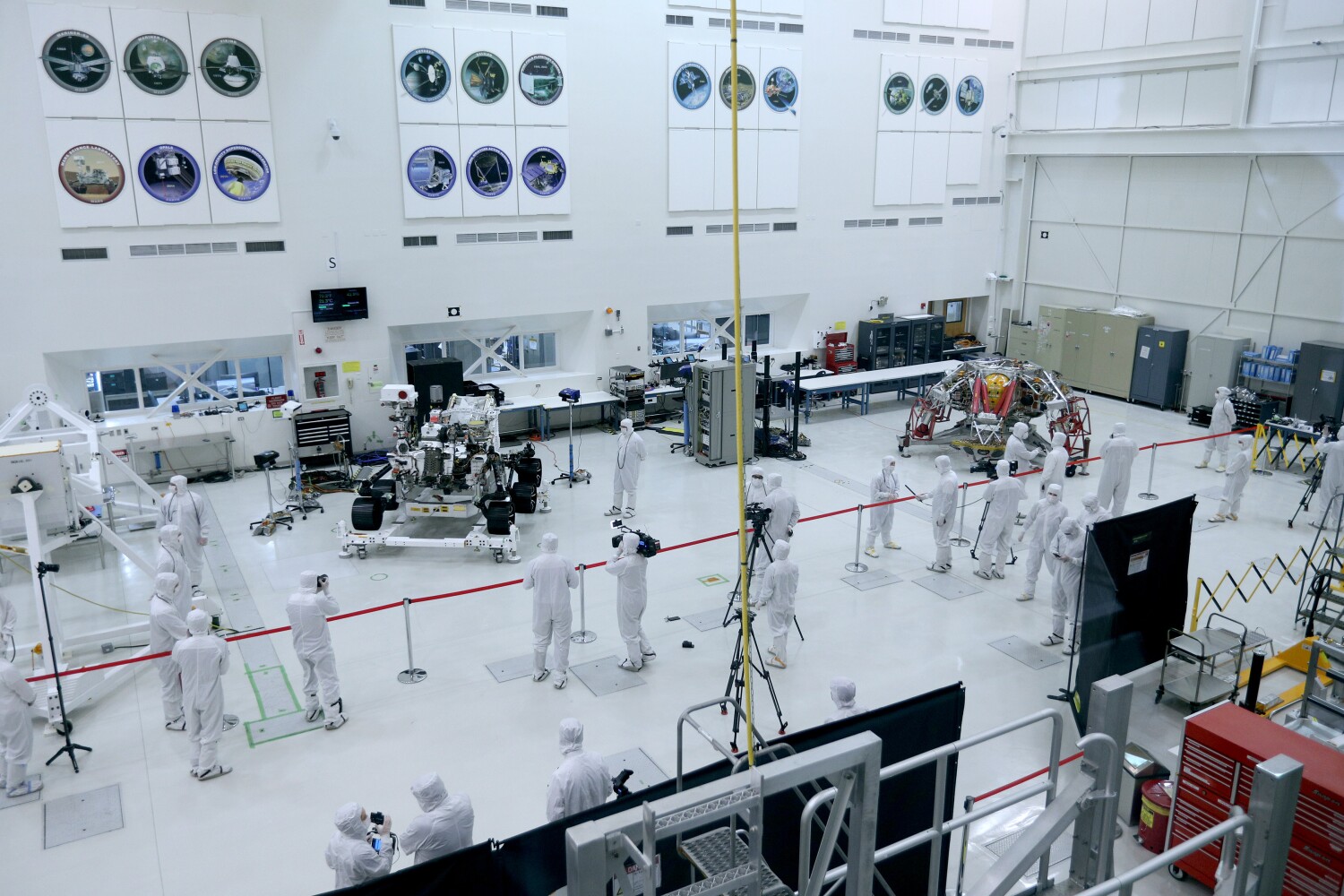 The Mars 2020 mission rover is set to launch from the Kennedy Space Center in July.

But excitement is already starting to build for NASA’s $2.5-billion project, which will continue to explore the potential for life on the Red Planet.

On Friday, more than 50 journalists from around the world donned protective suits, hoods and booties before entering the clean room at the Jet Propulsion Laboratory in La Cañada Flintridge to get a glimpse of the 7-foot high, 9-foot wide and 10-foot long robotic rover.

Ben Riggs, a mechanical engineer working on the rover, said the vehicle will remain protected throughout its shipment to Cape Canaveral.

“It’s always encased,” Riggs said. “When the vehicle gets moved, it gets on a flat truck bed that’s been specially modified to handle the vehicle. It’s normally stowed a little bit more compact and effectively double bagged.”

JPL’s team of scientists and engineers take great measures each day to protect the rover from any organic particulates — human hair, skin — to ensure that its findings are credible.

“We don’t want to bring any Earth microbes or have any elements on the vehicle that give us false science returns,” Riggs said. “We want to make sure that when we’re caching those samples that they’re pristine and from Mars.”

The rover will remain in an entirely controlled environment through its launch into space and until it arrives and is released onto Jezero Crater, a river delta on Mars, in early 2021.

Like many river deltas on Earth, Jezero Crater is a geological depository that will offer an array of samples to test, said planetary geologist Emily Lakdawalla.

“It was later buried, and the wind has taken away a lot of the sediment that was there before, so it’s been exhumed, like one would exhume a body,” Lakdawalla said. “The cool thing about it is that it’s been unburied at different levels so the Rover is going to be able to drive up to various locations inside the delta and be able to see it from the inside.”

As the rover descends into Mars’ atmosphere, the “flying gas can” slows from 200 mph to 2 mph in less than a minute via eight Mars Lander engines that produce 700 pounds of thrust apiece and a parachute, said Ray Baker, the flight systems manager for this mission. The last step of the rover’s deposit is severing the three nylon ropes that connect the rover to its transport, known as “umbilical bridles.”

Baker, who also helped send the Curiosity rover to Mars in 2011, said he hopes that the work he has done for the 2020 mission lays the groundwork for future scientists and engineers — including his daughter and son who attend Paradise Canyon Elementary school in La Cañada.

“We used to say the sky is the limit. For them, the solar system isn’t even the limit,” Baker said. “It’s normal for them that we’re going and exploring this other planet, and they’re thinking beyond that. It’s exciting to me that their imaginations think it’s possible to do something even greater than what we’re trying to do today.”

Mechanical engineer Zach Ousnamer said he and his team used pieces of technology created by labs all over the world to create the Mars 2020 mission, a rover with an unprecedented scientific payload.

Finding life on another planet, he said, “would be a global architectural shift in kind of the next big thing. It doesn’t really get bigger than that.”