After the police killing of unarmed black teenager Michael Brown in 2014 in Ferguson, Mo., widespread protests in Ferguson itself and around the nation contended that law enforcement in the U.S. is far too harsh on minority suspects.

The criticism was so intense and long-running that it spawned a theory dubbed the “Ferguson effect” by then-Police Chief Sam Dotson of St. Louis, the large Missouri city of which Ferguson is a suburb.

The theory seemed to get a boost when the FBI’s compilation of reports from local police departments for 2015 found that, after declining for two years, the number of violent crime reports increased nearly four percent. About the same increase was recorded in 2016. 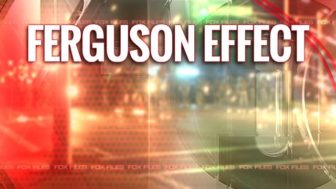 Since then, the “Ferguson effect” phenomenon has often been cited. When he was FBI director, James Comey pointed to videos of alleged police misconduct and declared that a “viral video effect” had prompted police to be less proactive so that their work would avoid scrutiny.

To examine the theory’s legitimacy, criminologists Christoper Marier of Appalachian State University in North Carolina and Lorie Fridell of the University of South Florida looked at 18,000 surveys of law enforcement officers in 87 police departments across the nation both before and after the Brown killing.

In a study published Tuesday in the journal Criminology & Public Policy, Marier and Fridell found little support for the “Ferguson effect,” but they did conclude that police job satisfaction had decreased and cynicism had risen.

It was true that in general, police officers were less satisfied with their jobs and more burned out than they were before the Ferguson episode, but the differences were negligible, Marier and Fridell said.

It was also correct that after 2014, officers issued fewer citations and conducted fewer foot patrols, but the changes were very small, suggesting that commitment to proactive community policing remained largely unchanged, the criminologists concluded.

The data were taken from surveys taken in an ongoing project called the National Police Research Platform. The agencies included reflected a random sample of police departments and sheriff’s offices with 100 or more sworn officers.

Viewing their jobs generally, “most officers are satisfied with the work they do,
and this is true both before and after Ferguson,” Marier and Fridell said.

The small decrease in job satisfaction after the Michael Brown case is “underwhelming” evidence that the dissent and protests following several police controversies had any appreciable effect on officers’ job satisfaction, they said.

Officers surveyed after Ferguson believed more strongly that the police are treated unfairly by the news media, but “most officers felt victimized by the media well before the nationally televised news of Eric Garner, Michael Brown, and other police-related deaths,” the criminologists said.

Although Marier and Fridell did not find strong evidence of de-policing after Ferguson, they did say that “poor morale is in some ways associated with reduced police activity at the officer level.”

For example, officers satisfied with their jobs issued more citations, and those who experienced burnout conducted foot patrol less frequently.

The researchers acknowledged that their study conflicted with others that supported the idea of a “Ferguson effect.”

They observed that this may have resulted from the fact that the other studies asked officers how their views had changed because of Ferguson, whereas the new study was based on surveys taken before and after the Brown shooting.

Marier and Fridell contend that their study “presents compelling evidence that public demonstrations against the police are not as consequential for police attitudes and behaviors as some have threatened.”

They added: “Although officers wrote fewer tickets and attended fewer community meetings after nationwide demonstrations, the changes were very small in magnitude.”

Still, police officer cynicism is high regardless of the level of “public antipathy,” the  researchers said, concluding that “some entrenched elements of police culture and morale may continue to challenge public administrators.”

This summary was prepared by Ted Gest, president of Criminal Justice Journalists and Washington bureau chief of The Crime Report.