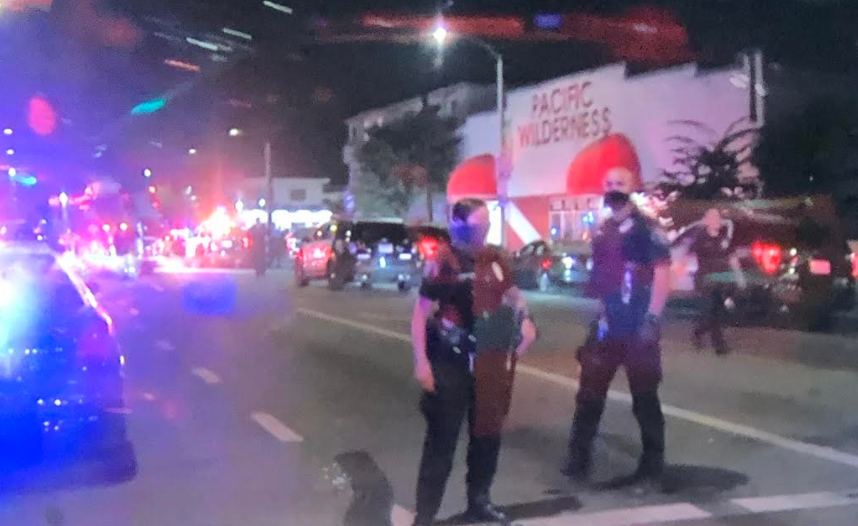 A 29-year-old suspect was in custody Sunday after he allegedly took an officer’s weapon, pistol-whipped him and fired shots inside the Los Angeles Police Department Harbor Division station in San Pedro, police said.

LAPD Chief Michel Moore said the officer had bumps and bruises and would recover from the injuries after the attack, which unfolded shortly before 10:30 p.m. Saturday.

The attack occurred after the veteran officer came to the front desk to assist a man who had walked into the station’s closed front lobby, Moore said.

A struggle ensued between the officer and the man, who allegedly took the officer’s gun from him, hit him in the head with the weapon and then began firing, Moore said. Sources who were not authorized to speak publicly about the matter said the man fired at least three shots.

An LAPD watch commander heard the commotion, saw the attack and opened fire, but his shots did not hit the man, who ran from the lobby, Assistant Chief Horace Frank said.

The man fled in a white pickup truck and was pursued by several officers. The suspect was apprehended at 18th Street and Pacific Avenue, where another altercation broke out before officers were able to take him into custody, police said. Authorities said another officer was injured in that arrest.

Moore said the suspect was treated for injuries at a hospital and would be booked in the attack. His identity was not immediately released.

“I am grateful that the officer who was in this incident tonight, who was working the desk, came out to assist this individual to understand what his needs were, that he survived and that during this engagement that he did not lose his life,” Moore said while speaking to reporters after visiting the officer. “He did not suffer the injury that apparently this suspect meant to inflict.”

Robbery Homicide Division detectives are investigating the attack and the motive has yet to be determined.

Mayor Eric Garcetti tweeted his support Saturday night for the injured officer. “Sending my best wishes for a quick and full recovery to our @LAPDHQ officer injured in an incident at the Harbor Station tonight,” he wrote. “The officer is in stable condition and we’re closely monitoring the situation.”

There have been other violent incidents involving local law enforcement officers in recent days.

On Friday, police said an off-duty LAPD officer was shot at in his car in Reseda by an unknown suspect with a handgun, police said. The officer’s vehicle was struck, but the officer was not injured. That incident remains under investigation.

Two weeks ago, two Los Angeles County Sheriff’s Department deputies were shot while sitting in a patrol vehicle in Compton in what authorities described as an ambush attack. The deputies survived but suffered serious injuries. Surveillance video shows the gunman fire at them at close range before fleeing. No suspect has been arrested in the attack.